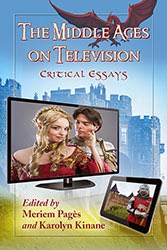 Medievalism on television gets some much-deserved attention in this upcoming book from McFarland. Place your pre-orders now:

About the Book
The past decade has seen a resurgence of popular interest in the Middle Ages. Television in particular has presented a wide and diverse array of “medieval” offerings. Yet there exists little scholarship on television medievalism. This collection fills this gap with 10 new essays focusing on the depiction of the Middle Ages in popular culture and questioning the role of television in shaping our ideas about past and present. The contributors discuss the currency of television medievalism, emphasizing the need for scholars of contemporary medievalism to pay attention to its manifestations on the small screen. The essays cover a range of topics, including genre, gender and sexuality. Series covered include Game of Thrones, Merlin, Full Metal Jousting, Joan of Arcadia, Tudors, Camelot and Mists of Avalon.

Full contents will be posted separately when it becomes available.

Posted by Blog Editor, The Association for the Advancement of Scholarship and Teaching of the Medieval in Popular Culture at 5:32 PM No comments: