The Ballad of the Lone Medievalist 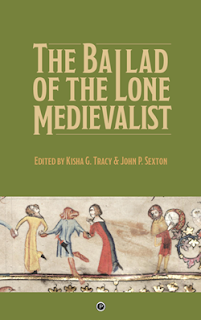 A massive collaboration effort has been officially released in The Ballad of the Lone Medievalist (2018). In it, you will find 33 essays on experiences, experiments, and ideas how on how medieval academics can creatively survive, relate, and thrive in worlds where the Middle Ages remain seemingly obscure and derided by peers and students.

Apropos to cinematic medievalism is the joint-essay “A Trip to England: Discovering the Ties Between Medievalism and Pop Culture” by Danielle Girard, Sarah Huff, Justine Marsella, Alicia Protze, Abbie Rosen, and Jacki Teague. During an undergrad trip to England, medievalists emphasize how during the trip “it became clear that there was an indisputable link between the medieval sites we visited and the fan culture that we so thoroughly immersed ourselves in daily.” And “while the world of academia may marginalize medieval scholars in favor of contemporary scholars, the world of popular culture embraces and profits from the fascinating and diverse stories of medieval culture.” The examples include but are by no means limited to the works of Tolkien, George R.R. Martin, and even Stan Lee. The medieval links include King Arthur and Robin Hood with visits to Tolkien’s grave and the Warwick Castle. The essay concludes, “A class discussing the origins of the most popular fan cultures would essentially be a class on medieval literature.”

In another essay, Lee Templeton found success by deciding to teach their colleagues with the goal of presenting “the Middle Ages not as a long-past, ‘dead’ time period, but rather one that laid the foundations for many of the ideas that we consider to be ‘modern,’ one that is still very much alive in its influence on the world in which we live.” One of the exercises includes requiring “the students to organize a ‘medieval’ film festival open to faculty, staff, and students.”

John P. Sexton presents a set of 12 suggestions to “help medievalists—whether newly-minted or mid-career—make themselves at home in their jobs.” In one suggestion on utilizing current events and pop culture, Sexton tells us “popular entertainment’s perpetual fascination with medieval themes provides us ‘teaching moment’ points of entry for any medievalist.” Among the opportunities are Game of Thrones, History Channel’s Vikings series, and Robin Hood. They rightfully point out, “Every time we enter into a conversation about the links (or lack thereof) between our subject and the world around us, we increase the visibility of our discipline while making a case to our students and colleagues for the necessity and relevance of our courses.” Above all, medievalists should “Get creative. Get active. Get noticed.”

The Ballad of the LoneMedievalist is therapeutic and immensely useful.

Askey on Game of Thrones

The Journal of Popular Culture is currently allowing open access to articles in its February 2018 number, which includes the following essay on Game of Thrones:

Posted by The Association for the Advancement of Scholarship and Teaching of the Medieval in Popular Culture at 8:52 PM No comments: