Out Now: Shakespeare Films: A Re-evaluation of 100 Years of Adaptations 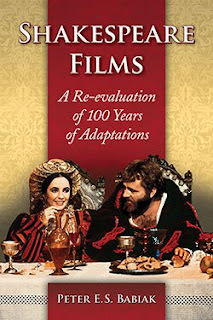 We've been a bit remiss in covering Shakespeare on the site. Here is a recent book from McFarland.

Shakespeare Films: A Re-evaluation of 100 Years of Adaptations
https://mcfarlandbooks.com/product/shakespeare-films/

This study reexamines the recognized “canon” of films based on Shakespeare’s plays, and argues that it should be broadened by breaking with two unnecessary standards: the characterization of the director as “auteur” of a play’s screen adaptation, and the convention of excluding films with contemporary language or modern or alternative settings or which use the play as a subtext. The emphasis is shifted from the director’s contribution to the film’s social, cultural and historical contexts. The work of the auteurs is reevaluated within present-day contexts, preserving the established canon while proposing new criteria for inclusion.


Peter E.S. Babiak has taught composition, drama, film studies and literature at several institutions in Southern Ontario, Canada. He has contributed chapters to scholarly books, published several articles in CineAction Magazine, and been a regular presenter at the Annual Conference of the U.S. Popular Culture Association since 2004. He lives in Canada.

Posted by The Association for the Advancement of Scholarship and Teaching of the Medieval in Popular Culture at 3:54 PM